×
Which towels do I use?

A quick intro to GSM, use scenario and best practices (7min read)

Which towels do I use and does it make a difference?

(GSM: grams per square meter, basically, the weight of the towel, not thickness) 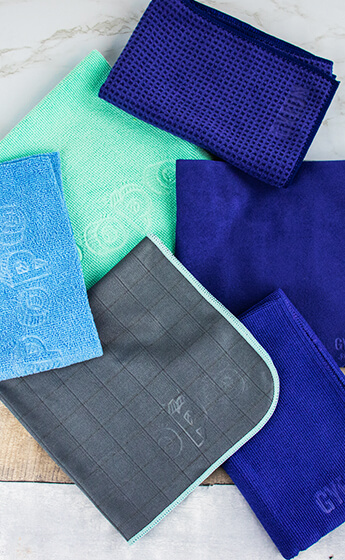 Low GSM/profile towels include: Suede, waffle, weave, glass & other similar towels that are not the 'fuzzies'.

Suede:  Suede towels are often used for ceramic coating removal or application, due to their high density and lintless build.  They make great window towels too, but generally less effective than waffle/glass towels due to the suede's lower GSM, affecting its ability to hold liquids.

Waffle: Waffles towels are low profile, but generally have higher GSM of between 400~600.  The added weight helps the towels to hold more water.  We recommend thinner waffle drying towels for smaller hands, they're much easier to wring out versus large blankets!  The added GSM also help with window cleaning; the more liquids it can absorb, the less will remain to cause streaks.

Weave: These are really good all-rounder towels, lintless, edgeless and has a good weight of generally in the low 300's.  These lintless towels are fantastic for ceramic coating removal.  Has a better 'grab' than the fuzzies at removing polishes and waxes, wiping leather cleaners and tacky conditioners, just a good all-rounder for anything in and out of the vehicle.

Glass: Lintless, not as soft, but higher GSM of between 350~400.  These are dedicated window towels.  The added GSM in the high 300's once again helps with absorption and eliminating streaks.  These can also be used by themselves without a cleaning solution.

Others: These usually sit in between 300~400 GSM, made with a 'grabbier' weave to pull off polishes and waxes similar to the weave towels. 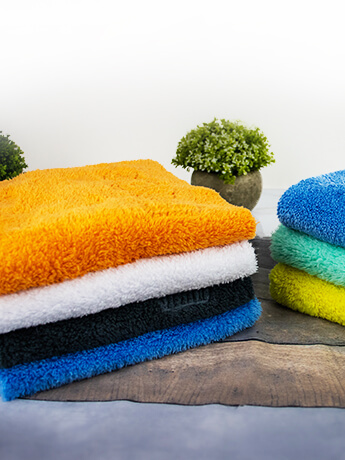 ~350GSM: These are great everyday exterior buffing/wiping/finishing towels due to how soft they are.  350's are ideal for detailing sprays, polish & wax removal, basically, anything you put on your paint, you want to use these to buff off.

~500GSM: Ideal for waterless, rinseless wash, and bird poop removal.  Not only 500GSM's are heavier, their fibres are generally also longer than the 350's.  Imagine the longer the hair (fibre), the more contaminants it can trap without exposing the grit.  You want the grit to get trapped and hide inside the towel's long fibres when doing your waterless washes, but do wash thoroughly after to get everything out.

The 350 and 500's can be used interchangeably.  The 500's just feel a little too thick and clumsy for quick detailers, and the 350's are not plush enough for waterless wash. 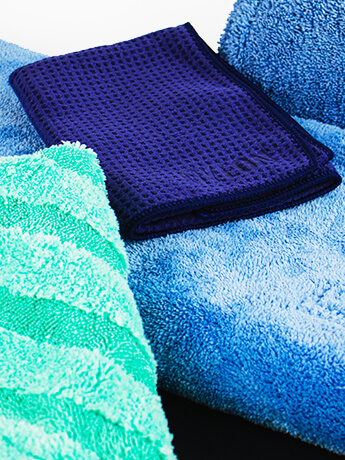 Traditional: Big, thick, high GSM in a traditional microfiber blend with a feel similar to the 350/500GSM fuzzy towels.  These monsters eat up a lot of water, but also make them hard to wring out (a towel of the correct size can dry the entire vehicle without the need to wring).  Basically, they're made with the maximum GSM the threads and needles can manage.  They also feel the softest vs twisted loop & waffle-weaves.

Hybrids: A combination of traditional + twisted loop; 50% is soft like the fuzzie towels, the other 50% eliminates the 'towel vacuuming onto wet paint' problem.  Plus the slightly lower 1000 GSM makes the towel easier to manage.

Waffle: The maximum GSM on waffle towels are in the 450~600's.  Mid-ranged GSM allows good water holding, but the advantage is in its 'thinness'.  Easy to move around, wring out, without having to wrestle with a big, wet towel.

Hope you find the above a little bit useful, now, back to the garage for me!...

A general rule of thumb is, no fabric softeners and no heat.  Microfiber towels are technically 'plastic', and with heat, it'll harden the fibres right up, decrease absorption and make the fibres shed.  You can take care of them well and they'll last for a while, but eventually, when the towels get old and crunchy, it's just time to retire them for dirtier jobs.

pH Neutral, eco-friendly and gentle.  Normally you want a higher pH detergent but not this time!  This bottle will give you ~17 washes.

Cleans towels and polishing pads.  A stronger than most detergent to really take things out!

Safe on high-efficiency washers.  Works with all textiles including microfibers, cotton, chamois, and other fabric blends.